From where I live in the Toronto, Canada area getting to Antarctica is quite a long journey. The first leg of the flight is to from to Santiago Chile. This flight is almost 11 hours from Toronto. In Santiago I will go through customs and immigration where I will need to get a Chilean Visa and collect all my luggage. Fortunately I have about 4 hours layover so I should have time to do all this even when the lines are long.

From Santiago I will get my next flight to Punta Arenas which is another 4.5 hours. Punta Arenas is located at the bottom of South America and is a good jumping-off spot for Antarctica. 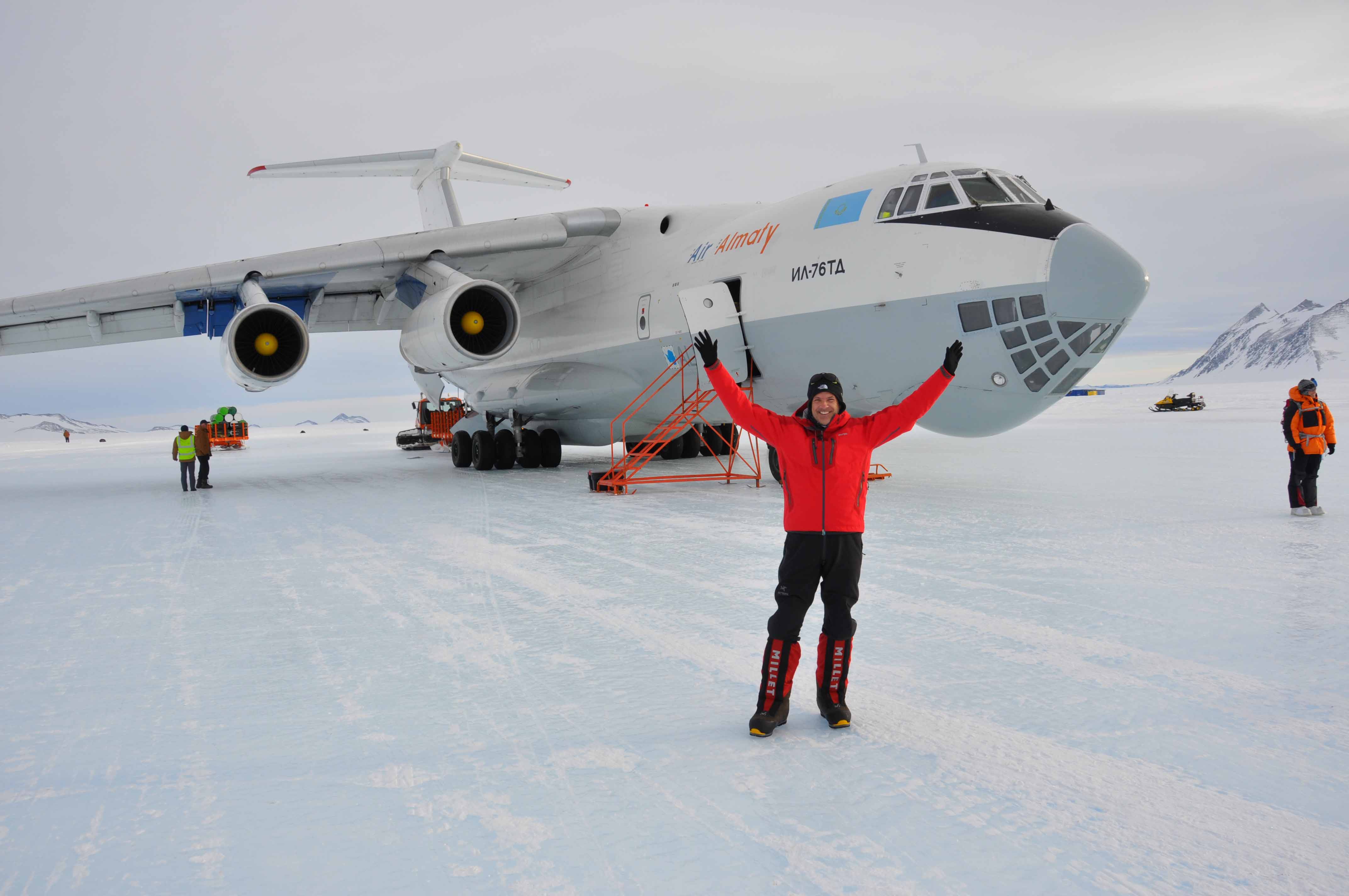 After a few days in Punta Arenas for last minute preparations we will board a Russian built Ilyushin IL-76 that will make the 4.5 hour flight to Union Glacier which is the main landing area for Antarctic expeditions. This flight can be delayed by days (my first time to Antarctica in 2011 this flight was delayed by 7 days) due to bad weather. The flying conditions need to be perfect for the plane to fly to Antarctica and to return so about a 12 hour window of good weather needs to be had.

The flight takes you over the Southern Ocean and is stunningly beautiful. However, as the Ilyushin is a military based cargo plane it is not built for comfort and there are few windows. The operating company ALE has installed a nose mounted camera connected to a large screen TV at the front of the passenger area so the passengers can see what is going on outside. Without this, the flight is just like an amusement park ride with lots of noise and shaking and then the door opens and you are there.

The seats are rudimentary and there is a bathroom in a space smaller than a broom closet consisting of a pail. The in-flight refreshments are self-serve and there are sandwiches, chips, chocolate, and coffee available. 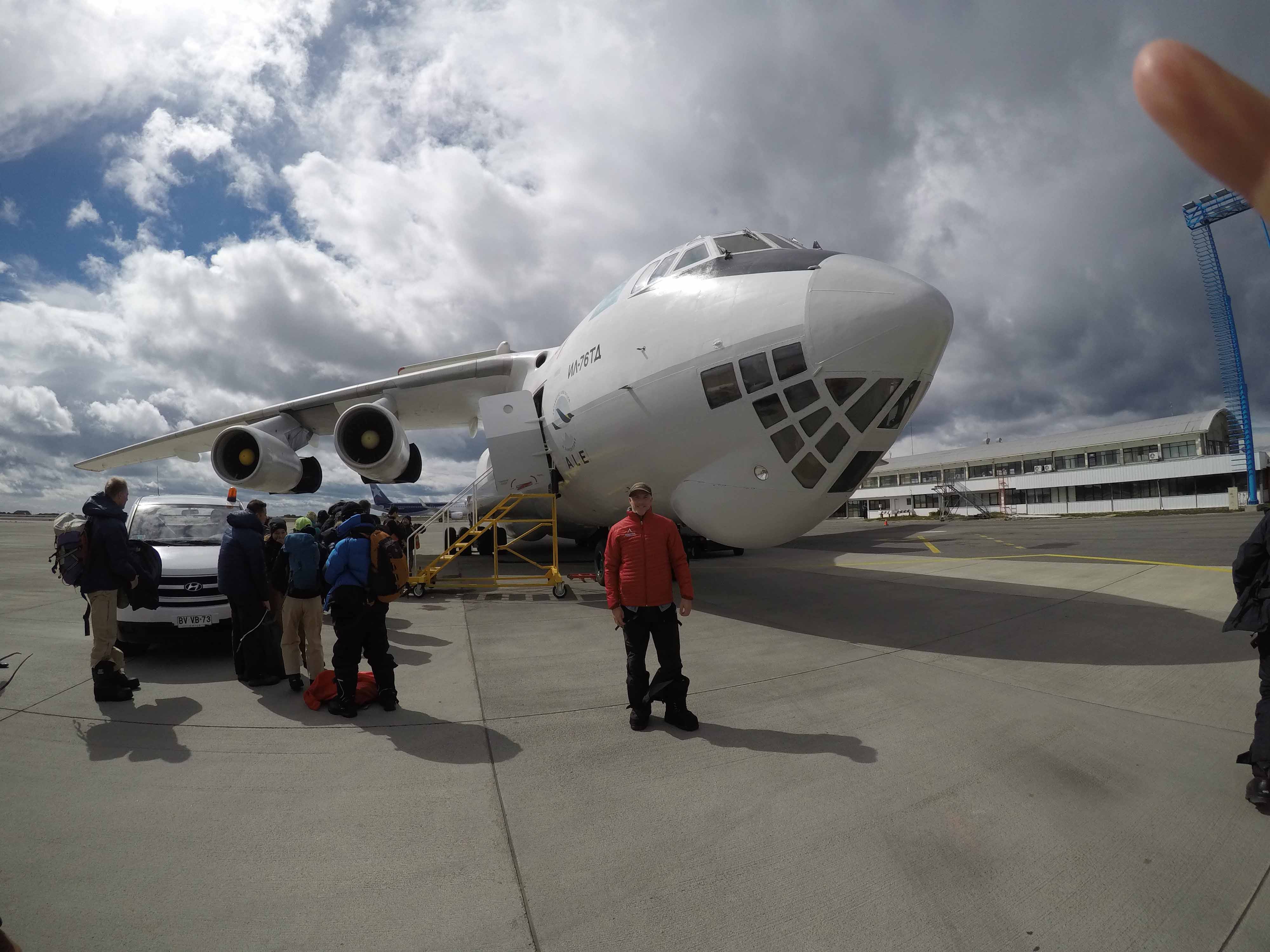 After 4.5 hours we land on a blue ice runway. This glacial ice is rock solid and over 2km thick. You could put on ice skates and cruise around if you wanted to. This surface allows this heavy plane to land without sinking into the snow. We quickly disembark the plane and are shuttles in huge specially designed 4×4 vans to the main union Glacier camp which is about 8km from the runway. The plane never shuts off as the cold temperatures may make it impossible to re-start. Once the plane is empty of people and cargo it is quickly re-filled for the return trip to Punta Arenas.

Once in Antarctica we get around using a fleet of Twin Otter and DC3 aircraft operated by Calgary based Kenn Borek Air. Many of these aircraft were build prior to 1970 and are the staple for wilderness flights in the Arctic and Antarctic regions as well as much other challenging flight environment the world over. The reason these older planes are used is that they are what is referred to as fly-by-wire plans and have no hydraulic systems and simple electronics that are not affected by the extreme cold temperatures.

These smaller planes are equipped with skis to land on the snow and to get you to the start location for your adventure.